As the 2018 summer festival season comes to a close, I had the privilege of talking to some of the veterans among the millions of attendees.  These multi-day festivals are certainly not appealing to everyone. Only certain people appreciate standing for hours at outdoor venues with temperatures over 90 degrees Fahrenheit. Additionally, you have to be a different breed of person to enjoy camping for four days in a field during a summer heat wave. Burning Man saw temperatures in the triple digits…and that’s in the middle of the desert.

Still, Americans travel hundreds if not thousands of miles around the country to attend their favorite music festivals. Firefly saw over 80,000 attendees and Tennessee’s Bonnaroo festival saw over 75,000 people. Coachella has sold out for multiple years in a row hosting over 700,000 attendees between the two show weekends. Of these millions, hundreds if not thousands of veterans are in the crowds. I was able to find some of these veterans to get their opinions and recollection of their festival experience. 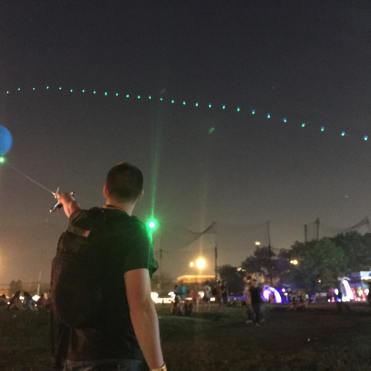 This is me holding Robert Bose’s Balloon Chain project at Governor’s Ball this past June.

Alicia, a human resources soldier at the Pentagon, attended Firefly for the second time this year. She was excited to see Eminem again after seeing him at the Washington D.C. Concert of Valor in 2014. She started attending music festivals after returning from a second tour to Iraq from 2013-2014. She describes Firefly as a great “no drama/bullshit-free zone” and a “great laid back environment”. Alicia plans to attend Firefly next year as long as her schedule permits it.

Anthony, an Army captain, enjoyed his second year at Electric Zoo festival in New York City. Electric Zoo is Randall Island’s premier EDM music festival. Anthony thought this years lineup of Tiesto, Kaskade, Alesso, and Martin Garrix all killed it. He thought the best sets came from AC Slater and Anne Lunoe who he skipped both Marshmello and Virtual Self to see. Electric Zoo was extra special for Anthony this year as Anthony had just returned from a tour in Afghanistan in July. Anthony says, “this was a highly anticipated event for my friends and myself. There was 5 of us and this was the sweetest event for us”. Anthony plans to attend Electric Zoo next year and Imagine festival this year.

Rob, a current New Jersey National Guardsman and former active duty musician for the Army are up to double digits for festival visits. Mostly because Rob operates an art project called Balloon Chain. Rob has constructed balloon art at Coachella, Burning Man, Burning Man Africa, Governor’s Ball, and many more festivals around the globe. Retiring from the NYPD this year, Rob plans to make Balloon Chain his full-time priority.

I can understand how veterans find a great experience at these music festivals. Commonly, veterans will attend a music festival soon after returning from deployment. Most have perspectives of dealing with “making the best of a situation” and that alone makes festivals more enjoyable. It takes a good attitude to find enjoyment during a thunderstorm while camping outside (Camp Bisco this July). Unfortunately, the crowds can be an issue for those with combat-related illnesses. Other issues such as Eminem’s controversial use of gunshot sound samples at Bonnaroo/Firefly could be an issue for combat veterans. Some festivals have made attempts of reaching out to the veteran community. In fact, Electric Forest has Electric Forces, a paid internship program for veterans to attend and work at the festival. Eventually, we might see other festivals adopt similar programs.

Whether it’s the forest EDM environment of Electric Forest or the week-long desert camping experience of Burning Man, many veterans find fulfillment at these festivals.  Music festivals have a great position to be able to connect with the veteran community. Hopefully, we will see more festivals work with veterans to make sure they can enjoy festivals just as much as the public. In the meantime, everyone has time to recoup and save money for the summer festival season next year.